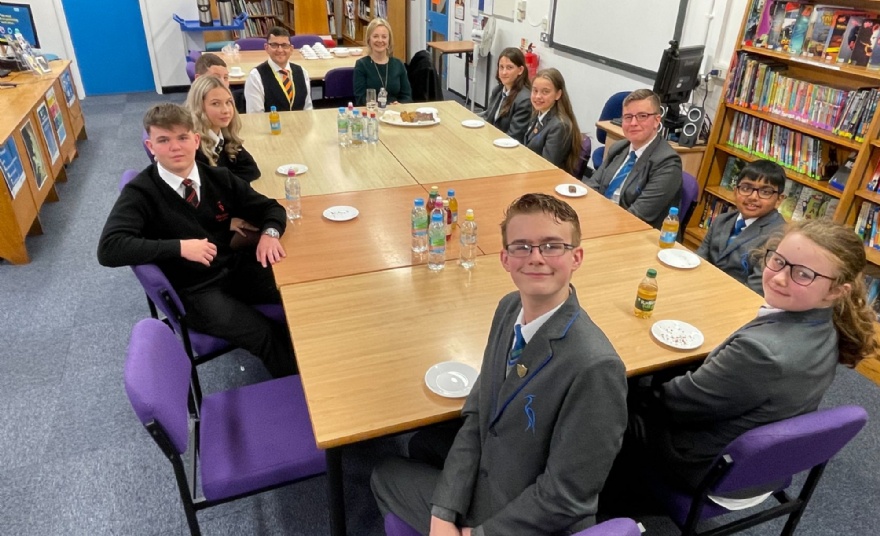 Students met with Foreign Secretary Liz Truss today after one of our pupils sent a special request for her to visit.

The MP for South West Norfolk was asked to come by Year 10 student Dylan Oakley, who has a keen interest in politics.
She took up the invite and met with ten students to discuss a range of topics such as covid and foreign policy, with Dylan asking for her thoughts on Margaret Thatcher as a political leader.
Ms Truss, who attended with her parliamentary aides and her Foreign Office Private Secretary, also held a ministerial meeting while at the school during her busy day’s schedule.
Head teacher Craig Jansen said: “We were delighted to have a visit from Liz Truss. Liz has visited our school on a number of occasions in the past.
“She always takes a keen interest in speaking with our students and finding out about the work of the school.
“We appreciate the time Liz gives our school despite her incredibly busy schedule.
“This was demonstrated by a request to the school for Liz to undertake a ministerial meeting at our school involving her counterparts from Asian and European countries.
“Our students and staff were quite amused and excited by the prospect of Marshland High School being host to such a ministerial meeting.”
He added: “I think the students were particularly interested to hear Liz tell them that she meets with and has responsibility for the foreign Secret Intelligence Service (MI6).
“Liz mentioned that MI6 are doing some fantastic things abroad to keep the UK safe.”
Ms Truss said: “It was fantastic to see Norfolk’s young generation taking pride in their learning after a difficult period for them.
“I thoroughly enjoyed discussing their hopes for the future. Craig and his staff have worked tirelessly throughout the pandemic to ensure the pupils are in the best environment to succeed.”